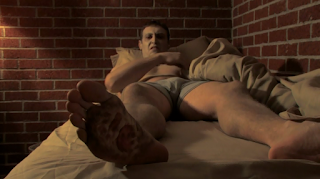 Sella Turcica, a surreal horror film by Fred Vogel, the same guy who made the August Underground Trilogy, but Sella Turcica is very different compared to Vogel's other incredibly violent films. The movie begins with a family getting ready for the homecoming of their beloved Brad, who had been at war. Brad is a gaunt and sickly looking man, restricted to a wheelchair after being paralyzed in the war. He's appearance is unsettling, but at first he seemed like normal guy, happy to see his family after his ordeal. Brad is welcomed home by his mother Karmen, who is played by Camille Keaton (from the original I SPIT ON YOUR GRAVE), his little sister Ash and her dick head boyfriend Gavyn (also known as DJ GASM, hah!), and his older brother Bruce and his wife. Throughout the film Brad's condition seems to get worse, with black fluid coming out of his ears and ass, a massive gaping wound on the bottom of his foot, and obviously dealing with the mental side effects of war. Every time Brad would talk about war, the tone of the movie immediately died, making for great unsettling moments, and as the film kept going it was clearly evident that Brad was suffering from something dark, as if something was inside of him, and controlling him.

This became clearly evident when Brad started going into violent convulsions, and excreting more black fluid from his ears and mouth. There's a scene where Karmen finds her son maniacally eating salt by the spoon fall, and notices that he made it to the kitchen without his wheelchair. As she comes back to the kitchen, he's missing, and finds him back in his room. The rest of the family begin to notice the foul smell coming from him, and all I could think that this guy was turning into some zombie. When his brother, Bruce, goes to check up on him, Brad tells him to leave, and after Bruce leaves, Brad snatches up the family dog (A pug named Fulci). Gavyn is in the kitchen fixing himself to eat. During this movie, Gavyn had been a huge dick to Ash, and incredibly insensitive towards Brad. Bruce has had enough with Gavyn's comments and a small fight breaks out, which is then broken up by Karmen. After the spat, Bruce heads outside with Camille, and Gavyn continues to lounge about inside, waiting for Ash to come home. While he was waiting he see's Brad in the kitchen... eating something. When he see's Brad eating Fulci, he's attacked, and his skull was crushed, blood spatter everywhere. Bruce and Karmen both walk in to find the bloody mess, and Brad convulsing on the floor. Ash walks in, and tries to help Bruce revive Brad, but he's gone... or so they think. Ash then discovers the body of her boyfriend and freaks out, going into another room with Karmen to call the cops. Everything turns very gruesome from there.

When Ash and Karmen leave to the other room, Bruce noticed Brad moving again. Brad gets up, and rips Bruce's jaw off, basically ripping his face off. Brad then smashes through a door, grabbing his sister by the head, picking her up, and decapitating her using the broken off shards of wood from the door. Karmen had no choice but to bludgeon brad to death, making sure he can be stopped. After a few good whacks Brad is dead but something is crawling out of his head. A sluggish, slimy, piece of flesh pushes its way out, and Karmen beats on it again, absolutely killing it. A scene pops up of old family videos of those who died, and then switches to a scene of the garage, with Karmen's feet hanging as someone opens the garage door.

I can't really say anything bad about this film. It was truly a great horror film with a lot of good drama and great unsettling parts. Even the acting was very well done, especially the actor who played Brad. The special effects, which really came out towards the end, were incredible, and the overall ending was great. I highly recommend this movie, especially if you're into dark and unsettling horror films.